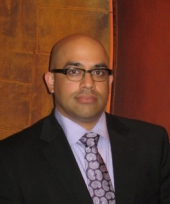 Anver M. Emon is a professor & Canada Research Chair in Religion, Pluralism and the Rule of Law at the University of Toronto Faculty of Law. He teaches Islamic law and works across multiple legal traditions in both his research and teaching, and brings that scholarly grounding to his consultations for governments, NGOs and legal advocacy groups around the world. Dr. Emon's research focuses on premodern and modern Islamic legal history and theory; premodern modes of governance and adjudication; and the role of Sharīʿa both inside and outside the Muslim world.  His general academic interests include topics in law and religion; legal history; and legal philosophy. He teaches torts, constitutional law, and statutory interpretation, and offers specialized seminars on Islamic legal history, gender and Islamic law, and law and religion. The recipient of numerous research grants, he was named as a 2014 Guggenheim Fellow in the field of law. In addition to publishing numerous articles, Emon is the author of Islamic Natural Law Theories (Oxford University Press, 2010), and Religious Pluralism and Islamic Law: Dhimmis and Others in the Empire of Law (Oxford University Press, 2012), as well as the co-editor of Islamic Law and International Human Rights Law: Searching for Common Ground? (Oxford University Press, 2012).  He is the founding editor of Middle East Law and Governance: An Interdisciplinary Journal, and series editor of the Oxford Islamic Legal Studies Series.